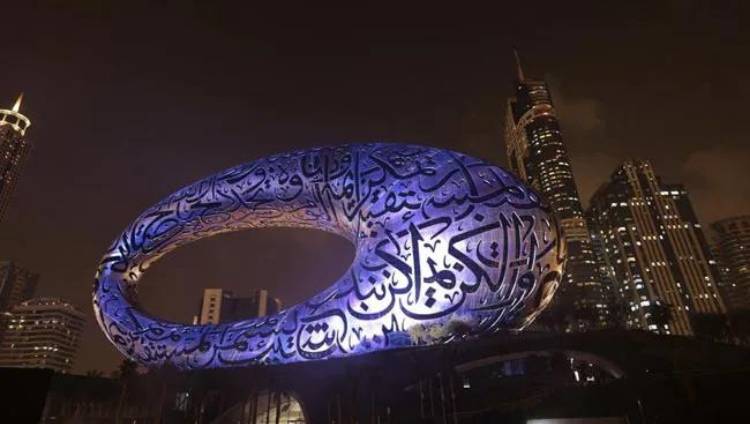 Dubai has opened the" Museum of the Future" (MOTF) on the historically significant palindrome date, February 22, 2022 and it’s being billed as the most high-tech and beautiful attraction in the country, if not the entire planet.Located next to the Emirates Towers on Sheik Zayed Road, the museum signifies a peek into the world 50 years from now, exhibiting and predicting how next-generation solutions  from artificial intelligence to augmented reality and identifying potential threats can enhance and revolutionize humanity for the better.“It is an architectural and engineering marvel, confidently straddling the past and the future and applying advanced technology to traditional art forms,” United Arab Emirates officials said during the opening.Made out of a fiberglass and stainless steel frame, the development was designed by architecture firm Killa Design, and has already been recognized by National Geographic as one of theworld's 14 most beautiful museums.But His Highness Sheik Mohammed bin Rashid Al Maktoum, vice president and prime minister of the UAE and Ruler of Dubai went a step further calling it “the most beautiful building on earth”While the museum's contents are yet to be revealed, it will exhibit design and technology innovations, taking the visitor on a "journey to the year 2071", organizers said.

Roadside sign boards described the museum  just minutes away from the world's tallest construction, the Burj Khalifa  as the "most beautiful building on Earth" ahead of its gala opening.It is the latest addition to the United Arab Emirates' (UAE) collection of flashy architecture and comes after the $7-billion Expo world fair, featuring a swathe of futuristic designs, opened on Dubai's outskirts on September 30.The UAE's capital Abu Dhabi is home to another landmark design, a branch of France's Louver museum, whose license was extended by a decade last year to 2047 at a cost of 165 million euros ($186 million).After French President Emmanuel Macron opened the Louver Abu Dhabi in late 2017, it attracted about two million visitors in its first two years before Covid hit.

Mission Majnu’s First Look Is Out!