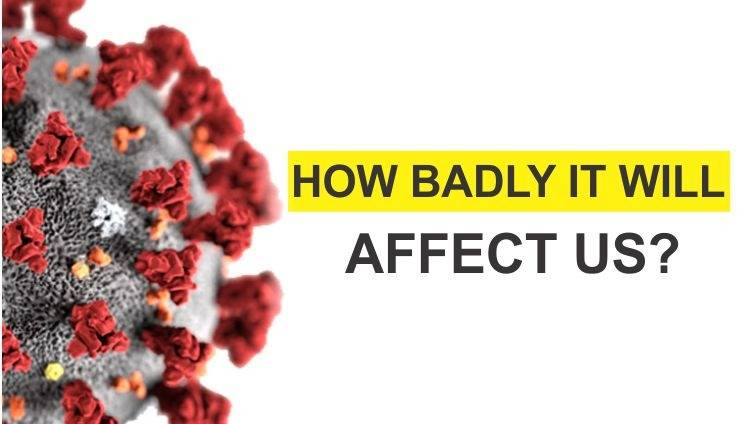 Coronaviruses (CoV) are a large family of viruses that cause illnesses ranging from the common cold to more severe diseases. A novel coronavirus (nCoV) is a new strain that has not been previously identified in humans.

It is the largest category for an RNA virus. It is difficult to detect if coronavirus or a different cold-causing virus is causing you fever in most cases. Known as “COVID-19”, the newly identified coronavirus can cause pneumonia, and like other respiratory infections, it has an incubation of between 1 and 14 days. The first known infections from SARS-CoV-2 were discovered in Wuhan, China. The source of viral transmission to humans remains unclear, as does whether the virus became pathogenic before or after the spillover event.

The impact of the coronavirus pandemic on India has been largely disruptive in terms of economic activity as well as a loss of human lives. Almost all the sectors have been adversely affected as domestic demand and exports sharply plummeted with some notable exceptions where high growth was observed. We went through a prolonged national lockdown and a significantly lower number of peak cases in the first wave. Manufacturing and the urban economy had come to a grinding halt while the rural economy continued to move because of less strict lockdowns. As a result, agriculture, which is the primary driver of our rural economy employing 58% of our population, continued to grow. Agriculture further benefited from good monsoon and cheaper and higher availability of labor.

Gradually, through sources, people got to know about the 2nd variant, which was famously known as Omicron. Comparatively, this virus was less effective and harmful and during this wave, the mortality rate was too low, but still, the government took positive action in many states and allowed only 50% of the population in institutions followed by the night curfew. In the second wave, rural areas started reporting more cases than urban ones from the second month itself. An analysis of more than 50 most severely hit districts, 26 were in rural areas. Rural areas in the state of Maharashtra, Andhra Pradesh, and Kerala were the worst impacted. The situation was further aggravated, due to the inadequacy of medical infrastructure in the rural areas and the rush of patients from villages and smaller towns to urban centers. With the Sounding alarm over COVID-19's new Omicron variant, the Reserve Bank of India (RBI) said that the global economy remains hostage to heightened uncertainty, with the new virus strain sparking fresh containment measures. It noted "surging infections, supply chain snags, logistic disruptions, and inflation touching multi-year highs in several economies."

According to the sources, it has been informed about the new variant, which is considered the most dangerous with the highest mortality rate commonly known as NEOCOV. NeoCov stands for Neoromicia, the species of bat that have been infected with the virus. This is not SARs-CoV-2 or a variant of that. This is associated with MERS Coronavirus. MERS Coronavirus is Middles East Respiratory Syndrome coronavirus. It is a zoonotic virus which means that it is transmitted between animals and people. It was first identified in Saudi Arabia in 2012. According to WHO data, approximately 35% of reported patients with MERS-CoV have died. Typical MERS symptoms include fever, cough, and shortness of breath. Pneumonia, gastrointestinal symptoms, including diarrhoea, are adiarrheated as symptoms, but not very common. Most of the human cases of MERS-CoV infections spread through human-to-human infections.

Scientists in China have warned about a new strain of coronavirus, NeoCov, related to the Middle East respiratory syndrome MERS-coronavirus. NeoCoV carries with it the potentially combined high mortality rate of MERS-CoV (where one in three infected people die on average) and the high transmission rate of the current SARS-CoV-2 coronavirus, the researchers have said. The NeoCoV virus has been previously linked with outbreaks in countries of the Middle East in 2012 and 2015. It is quite similar to COVID-19 causing coronavirus in many ways. NeoCoV was found in a population of bats in South Africa and has spread exclusively among these animals but further mutations may make it potentially harmful," as said by the scientists. They have also said that infection with NeoCov could not be cross-neutralized by antibodies targeting SARS-CoV-2 or MERS-CoV.

The World Health Organization has said that whether NeoCov coronavirus, reportedly found among bats in South Africa, poses a threat to humans requires further study. "Whether the virus detected in the study will pose a risk for humans will require further study," WHO told Russian news agency Tass. WHO is aware of the new finding of Wuhan scientists and is in touch with the World Organization for Animal Health, the Food and Agriculture Organization to respond to this. Also, "Animals, particularly wild animals are the source of more than 75% of all emerging infectious diseases in humans, many of which are caused by novel viruses. Coronaviruses are often found in animals, including in bats which have been identified as a natural reservoir of many of these viruses," WHO said.

NeoCov is not SARS-CoV-2; it is a separate virus.

What happended with Amar Jawan Jyoti?

The Amar Jawan Jyoti was constructed as a memorial for Indian soldiers who were...

Things you should know about ios 14

Pros and cons of the IOs 14 new update, Some good news for IOs Users