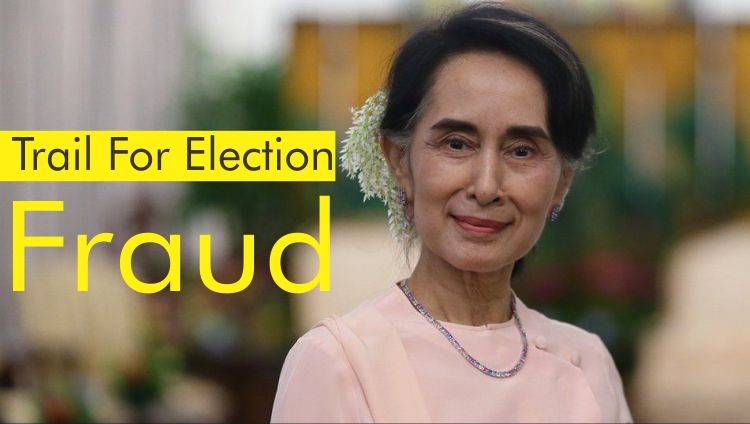 Aung San Suu Kyi is a Burmese politician, diplomat, author, and a 1991 Nobel Peace Prize laureate, born on the 19th of June in the year 1945  in Rangoon (now Yangon), British Burma. According to Peter Popham (a well-known Journalist), she was born in a small village outside Rangoon called Hmway Saung. She served as State Counsellor of Myanmar (equivalent to a prime minister) and Minister of Foreign Affairs from 2016 to 2021. Suu Kyi was not able to be president. Instead, she became the State Counsellor of Myanmar. She brought some democracy to her country with nonviolence. She has served as the chairperson of the National League For Democracy (NLD) since 2011, having been the general secretary from 1988 to 2011. She played a vital role in Myanmar's transition from military junta to partial democracy in the 2010s. Recently, She brought some democracy to her country with nonviolence.

Let’s have a look at what exactly happened that she was considered to be involved in fraud.

Myanmar's junta has charged Aung San Suu Kyi with influencing election officials during 2020 polls, a source said on Monday, a year after it staged a coup alleging massive voter fraud. Junta, (Spanish: “meeting”), committee or administrative council, particularly one that rules a country after a coup d'etat and before a legal government has been established. The word was widely used in the 16th century to refer to numerous government consultative committees. Suu Kyi, 76, has been detained since the February 1 coup last year that triggered mass protests and a bloody crackdown on dissent with nearly 1,500 civilians killed, according to a local monitoring group. The Nobel laureate is facing a raft of charges including violating the country's official secrets laws and if convicted all of them could face sentences tallying more than 100 years in prison. She will face a further trial on charges of influencing the country's election commission during the 2020 polls that saw her party defeat a military-aligned rival, a source with knowledge of the case said. The case will be wrapped up within six months, the source added. Former president and stalwart of the National League for Democracy (NLD) party Win Myint will face the same charge, the source said. Several senior members of the national electoral commission have also been arrested since the coup, accused of masterminding the NLD's landslide victory. The junta cancelled the results of the 2020 election in July last year, saying it had found some 11.3 million instances of fraud. Independent monitors said the polls were largely free and fair. The junta has promised to hold another election by August 2023 if the country, currently riven by fighting between the military and anti-coup fighters, is restored. Ahead of the Tuesday anniversary of the putsch, the junta has warned that noisy protests or sharing "propaganda" against the military could be charged with high treason or under the anti-terrorism law. Suu Kyi has already been sentenced to six years in jail for illegally importing and owning walkie-talkies, incitement against the military, and breaking Covid-19 rules.

Myanmar's ousted former leader Aung San Suu Kyi and deposed President Win Myint will face five additional charges of corruption, each carrying a maximum of 15 years in prison, a source familiar with the proceedings said on Friday. The cases centre on hiring a helicopter while in the office said the source, who declined to be identified because they were not authorised to speak to the media.

A court in military-ruled Myanmar postponed its verdicts Monday on two charges against ousted leader Aung San Suu Kyi in which she is accused of importing and possessing walkie-talkies without following official procedures, a legal official familiar with the case said. The case in the court in the capital, Naypyidaw, is among many brought against the 76-year-old Nobel Peace Prize laureate since the army seized power on Feb. 1, ousting her elected government and arresting top members of her National League for Democracy party. The court gave no reason for delaying the verdicts until Jan. 10, according to the legal official, who insisted on anonymity for fear of being punished by the authorities, who have restricted the release of information about Suu Kyi's trials.

A court in military-ruled Myanmar will start the election fraud trial of deposed leader Aung San Suu Kyi on February 14, a source familiar with the proceedings said on Monday.

Suu Kyi faces trial in more than a dozen cases and so far has been sentenced to a combined six years in detention by a court in the capital Naypyitaw, in legal proceedings derided by the international community as a sham. She has denied the army's accusations of influencing the election in the 2020 poll swept by her party.

Everything You Need to Know