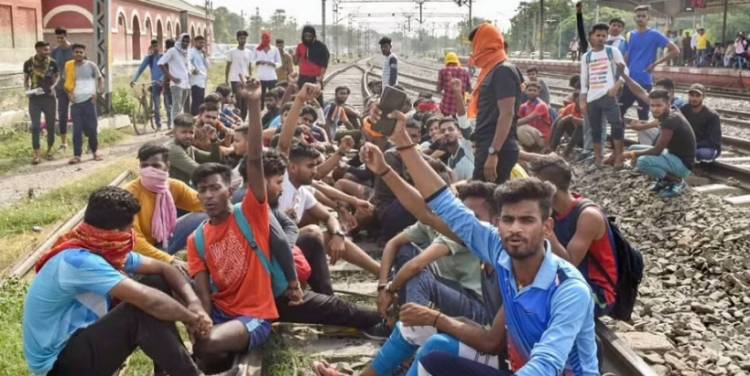 Protest against Agneepath recruitment has created havoc all over India, especially in north India. At first, the protest began in Chapra, Nawada, Munger, and Jehanabad of Bihar and now it spreading to Uttar Pradesh, Haryana and Rajasthan as well.  They burned tyres and vandalized buses and vans to make their points.  In Bihar,  protesters sat on the railway track, then set things on fire in Madipur of Muzaffarpur and blocked the road and tracks. loss of various government properties like the burning of the train and stone-pelting at army personnel in Kaimur district of Bihar.

Rahul Gandhi tweeted,  “When India faces threats on two fronts, the uncalled for Agnipath scheme reduces the operational effectiveness of our armed forces.”

The protester has been demanding the withdrawal of the army scheme in which youth will get the opportunity of joining the army from the age of 17.5 to 21. They will also be entitled to monetary benefits at the end of their 4-year tenure.

The aspirants are unhappy with the decision under the recruitment scheme for the Indian army. The length of the service no pension and the age restrictions of 17.5 to 21 make many candidates uneligible. under this scheme "They will neither get a pension, military hospital services nor canteen facility after four years of service".

Jehanabad protesters said, "Where will we go after working for only four years?.. we will be homeless after four years of service. So we have jammed the road, and the country's leaders will now get to know that people are aware.

Another protester said,  "We work hard to get inducted into the Armed forces. How will the service be for four years, with months of training and leaves? How will we protect the nation after getting trained for just three years? The Government has to take back this scheme,’’ another aspirant said.

Ranbir Kapoor’s first look from the Shamshera poster gets leaked! The internet goes...

Narendra Modi was decorated with the Order of St Andrew the Apostle- the highest...

Are You Aware Of This Inspirational Journey Of This Begger??

The life journey of a girl from Bihar’s Patna is serving as an inspiration for millions...

Why marrying away is the best choice!

A destination wedding is one of the best ways to plan a fabulous wedding with fewer...