Bollywood Singer KK died at 53, after performing in Kolkata Krishnakumar Kunnath aka KK died at the age of 53 on Tuesday. He was in Kolkata for a two-day concert. The show began at 5 pm at Nazrul Manch in Kolkata. According to the resources, KK felt unwell during the concert. He complained to feel uneasy during the interval yet managed to get through to the end of the event. Post that, he was taken to a five-star hotel in Esplanade, where his health was seen to deteriorate. He was then rushed to the Calcutta Medical Research Institute (CMRI) at around 10:30 pm, where he was declared dead due to a Heart Attack. The concert had been organized on behalf of Gurudas College.

KK is survived by his wife Jyothy, and their two children, son Nakul Krishna Kunnath and daughter Tamara Kunnath

The West Bengal Sports and Youth Affairs Minister Arup Biswas rushed to the hospital immediately after the death of the singer. His family members were informed as soon as the incident took place and were likely to reach Kolkata on Wednesday Morning. Singer Abhijit Bhattacharya stated that KK’s body will be flown back to Mumbai after the autopsy. 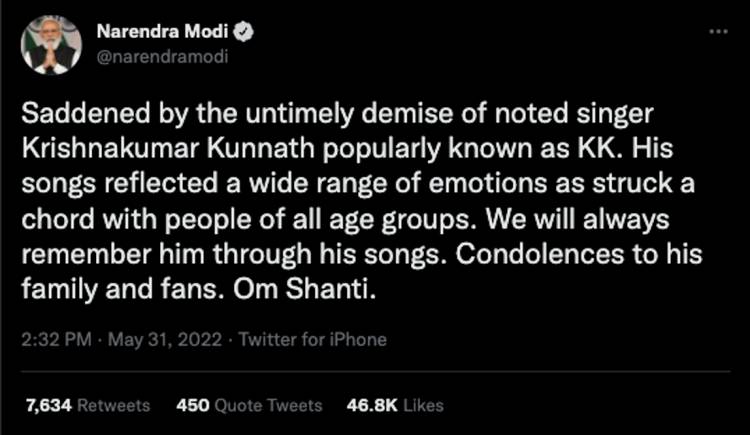 Prime Minister Narendra Modi also pays his condolences through Twitter saying “Saddened by the untimely demise of noted singer Krishnakumar Kunnath popularly known as KK. His songs reflected a wide range of emotions and struck a chord with people of all age groups. We will always remember him through his songs. Condolences to his family and fans. Om Shanti,"

The country has lost a magnificent and talented singer of all time. One could never replace such a gem.

Man dressed as an elderly lady throws a cake at the Mona...

Are You Experimenting with Active Skincare Products?