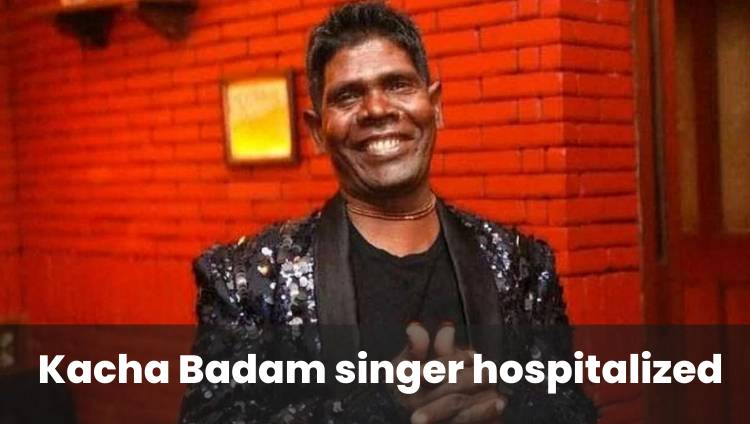 Bhuban Badyakar, who rose to fame with his song Kacha Badam, met with an accident on Monday. Bhuban has received injuries on his chest and face. While trying to drive his newly purchased second hand car he met with a car accident.  He is Bhuban Badyakar , a peanut seller who became an internet sensation after his song Kacha Badam went viral on the internet. He had an accident on Monday and received injuries on his face and chest. Bhuban is currently basking in the success of the song,  with social media users making Instagram Reels on it. The song is now uploaded on YouTube and has garnered over 50 million views.As per a report, Bhuban met with an accident, while he was learning to drive his recently purchased second hand car. He is currently admitted to Suri Super Speciality Hospital in Birbhum, after getting hurt in the chest and face.

The singer told Indian Express that he was doing better but has bowed out of professional commitments for some time as he recovers. Earlier, in an interview with AajTak, he talked about his viral song and how he had no idea that people would like it. He said, “I just want people to know about my song and I want the government to help me with some funds to make some permanent living arrangements for my family. I also want to give them good food to eat and good clothes to wear.”Earlier, in a video shared by actor Neel Bhattacharya. Bhuban was seen dancing to his own song in an Instagram Reel uploaded by actor Neel Bhattacharya. Sharing the video, Neel wrote, “With the Man Himself who sang this song. Support This Gem... Happy to meet him,” In the clip, Bhuban is seen dancing to Kacha Badam along with a group who are all doing the famous hook steps.Bhuban is a resident of Dubrajpur block of Kuraljuri village in Lakshminarayanpur Panchayat of West Bengal’s Birbhum district. Before the song went viral, Bhuban used to sell peanuts on his cycle and earn Rs. 200-250 in a day. He has a family of five, which includes his wife, two sons and a daughter.

Why do we celebrate World Wildlife Day : History , Theme of 2022

Everything you need to know about Sidhu Moose Wala’s tragic...

Let’s know about the symptoms of new COVID variant- Omicron

Doctors in South Africa have seen few symptoms among the people infected with Omicron,...